Can Forests Buffer Against Malnutrition? Evidence from Vital Signs Data Monitoring in Uganda

Can Forests Buffer Against Malnutrition? Evidence from Vital Signs Data Monitoring in Uganda

Can Forests Buffer against Malnutrition? Evidence from Vital Signs Data Monitoring in Uganda.

Many studies have demonstrated how forests and natural areas can improve dietary diversity[1], food security and nutrition[2].  Forests provide a greater variety of foods than agriculture alone[3], and can remain productive even during times of drought and climate stress, when agriculture fails.  People in rural parts of the developing world depend directly on forest food products like bushmeat, fruit, nuts, insects, leaves, and honey to provide nutrition[4]. Nonfood products like building materials and medicines can also bolster food security by providing additional sources of income.

Preliminary Vital Signs results show the role that forest resources play in nutrition and the toll that missing forests take is exemplified in three landscapes in Uganda: Masindi in Western Uganda, Kisoro in the southwest, and Yumbe in the Northwest.

Masindi is one of the most agriculturally productive parts of Uganda – households grow maize and sunflower, as well as cash crops like tobacco and sugarcane.  Farmers use ample agricultural inputs like fertilizers and pesticides, and most use ox ploughs, with others preferring tractors.  The average household in Masindi produces $341 a year worth of crops with some households producing over $1,000 annually.  This high agricultural output means that malnutrition is relatively low with only 22% of children surveyed being stunted.

Kisoro, on the other hand, has some of the lowest levels of agricultural production – farmers have small fields because of the high population density, and erosion is a major issue given the rugged terrain.  The average household’s total annual agricultural production is valued at only $120. Unsurprisingly, given the poor agricultural trends, rates of malnutrition are very high – 55% of the children under five surveyed by Vital Signs were stunted, indicating long term malnutrition.

Both Kisoro and Masindi illustrate how agriculture is critical to nutrition in subsistence and smallholder farmers – there is often a strong direct relationship between agricultural output and rates of stunting.  One landscape in the north of Uganda, however, bucks this trend.  The average household in Yumbe produces less agriculturally than Kisoro ($90/year), but has lower rates of stunting than Masindi (18%).  How do people in Yumbe sustain such positive nutrition rates with relatively little agricultural production? By significantly supplementing their diets with forest products.  Households in Yumbe use large quantities of honey, bush meat, shea nuts, and insects from the forest – nearly $100 worth per year (fig1).  These resources are not available to people in Kisoro or Masindi, who mostly only use building materials from the comparatively smaller forests they have nearby.  The forests adjacent to the landscapes in Kisoro and Masindi are some of the largest in Uganda but they are protected and hence inaccessible by the locals. However the woodlands in Yumbe are less destroyed and accessible for wild food and honey. 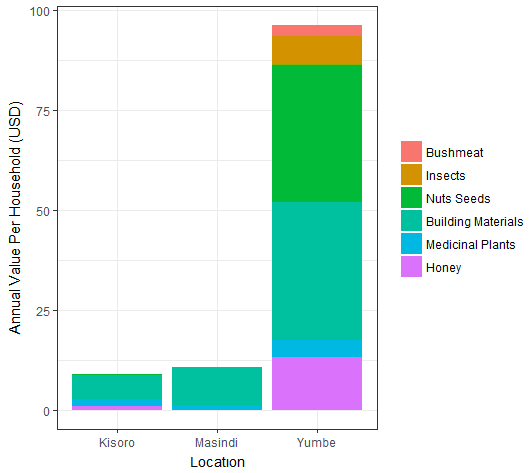 Fig1: Barchart showing the Annual Value per Household of Resources derived from Forests per Landscape

The above results underscore the role that forests play in improving nutrition, and without forest foods households can be entirely dependent on agricultural production.  This leads to chronic malnutrition where agricultural output is low, and leaves children much more vulnerable to climate shocks including drought.

For more on VS work and data see http://vitalsigns.org/and https://www.afrii.org/

Notes: Landscape is a 10km X 10km area for which high resolution satellite images are repeatedly acquired on a daily to five year interval and in which Vital Signs develops an in-depth understanding of the spatial, temporal dynamics of agriculture, ecosystems and human well-being.  Within each landscape 20 Household are randomly surveyed.  For each household, anthropometric measurements were taken for all children under the age of 5.