Are the effects of extension services on crop productivity moderated by farmer's education attainment? Results from 25 Landscapes in Uganda, Rwanda, Tanzania and Ghana

Are the effects of extension services on crop productivity moderated by farmer's education attainment? Results from 25 Landscapes in Uganda, Rwanda, Tanzania and Ghana

This analysis is a result of the collaboration between the eScience Insitute Data Science for Social Good Program and Vital Signs. Learn more about this program here.

Existing studies of farmer field schools (FFS) have found that these programs exhibit a sizable positive effect on per-acre crop productivity value among households with lower educational attainment, with negligible effects on higher-education households[1] [2]. In these analyses, we examined whether a similar effect can be observed when examining a broader set of extension services.Agricultural households in Vital Signs landscapes were therefore asked whether they received extension services in the past 12 months. The categories of extension services used in this study were Agricultural Production, Agro-processing, Marketing, and Livestock Production.

In the analyses,we  examined the effects of extension services on crop productivity and if these services were moderated by farmers’ educational attainment. To measure receipt of extension services, we counted the total number of instances in which a given household received advice on any of the topics measured in the Vital Signs dataset. For example, if a household received advice from two sources on Agricultural Production and one source on Agro-processing, we counted that household as having received three extension instances.

For education, previous studies [2] have measured education using educational attainment of the head of the household. However, based on our team’s experience providing and examining extension services in the region, we argue that the maximum individual-level educational attainment represents a better measure. Older household members often receive fewer opportunities to study than their younger counterparts, who may be able to “translate” advice.

Otherwise, to maintain consistency with existing work we attempted to maintain the same set of independent variables as those used in previous studies [2]. In particular, we controlled for country, total area farmed, household size, age of household head, gender of household head, and median household-level field distance to road and market. We also included variables corresponding to field ownership and shared field usage, discretized into “All Owned”/“Some Owned”/“None Owned” and “All Shared”/“Some Shared”/“None Shared”, respectively.

Household-level maximum education values are shown on the map and figure below. Households in most landscapes across the dataset displayed roughly similar education values, though education levels in Ghana were slightly higher than those in other countries. 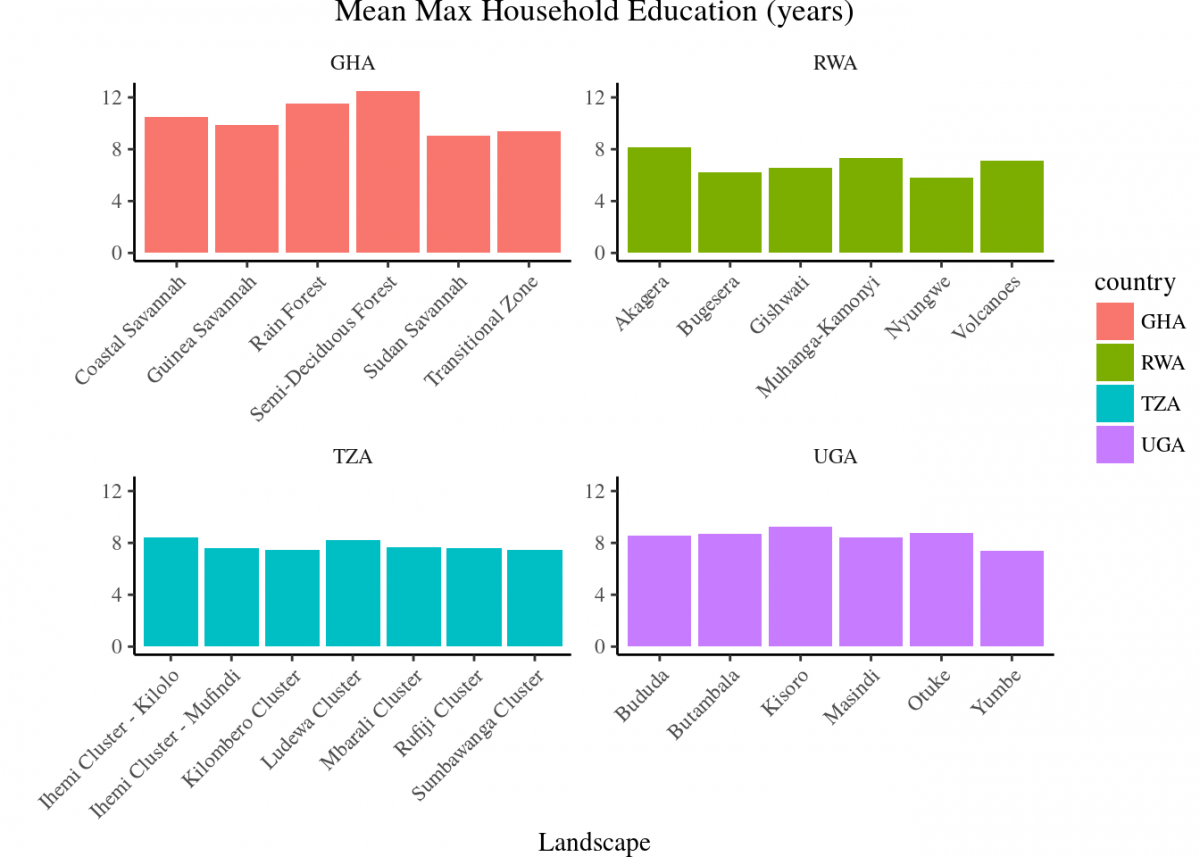 To model the relationships between the dependent variable (logged total crop value by household) and the independent variables described above, we used Kernel-Regularized Least Squares (KRLS) approach[3]. KRLS is a flexible regression model which treats each observation as a weighted combination of the values of all other observations in the dataset, weighted by their similarity to the given value [3]. This approach allows us to easily explore mediating relationships like the one outlined in this paper, without making strong assumptions regarding the shape of the relationship between the variables under consideration. Controlling for the other predictor variables described previously, we estimate that the average marginal effect of the total extension services variable is positive and significant. Under this approach, each additional extension service received is associated with approximately a 12% increase in total crop value. In contrast to previous studies,[2]) the effect of extension services does not appear to be moderated by education. The figure below plots the marginal effect of extension services for each household in the dataset, organized by the maximum education value in each household. 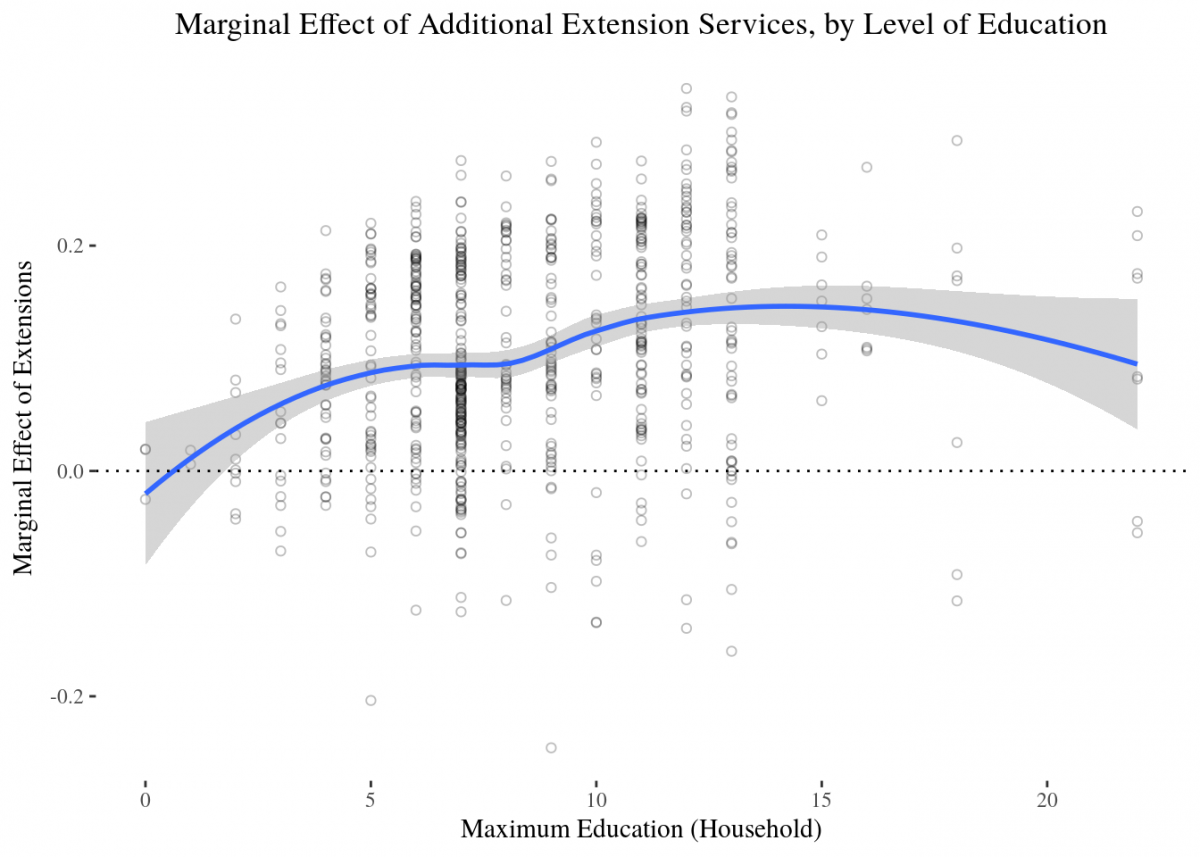 If the relationship found by [1] was present in the Vital Signs dataset, we would expect the curve in this figure to positive at lower education values and downwardly-sloping for higher education values. In words, the effect of extension services should be positive and significant for low-education households, and near-zero (or even negative) for high-education households. Instead, the relationship is slightly upwardly-sloping, suggesting that the effect of extension services is roughly constant (or perhaps slightly increasing) with education.

Based on the results presented here, extension services appear to have a positive effect albeit small on total per-household crop production. This effect does not appear to be moderated by education, unlike previous studies. Similar results using a standard linear model were found, though not all coefficients achieved statistical significance. Future versions of this analysis might benefit from a more extensive missing data strategy or a more theory-driven approach to functional form specification, as opposed to the more exploratory approach taken in this report.

[1] Kristin E. Davis."Extension in Sub-Saharan Africa: Overview and Assessment of Past and Current Models and Future Prospects". International Agricultural and Extension Education 15.3(2008): 15-28