Do Female-Headed Households Have Less Access to Agricultural Capital and Services? Results from Vital Signs Data from 25 African Landscapes

Do Female-Headed Households Have Less Access to Agricultural Capital and Services? Results from Vital Signs Data from 25 African Landscapes

Do Female-Headed Households have less access to agricultural capital and services? Results from Vital Signs Data from 26 African landscapes

In the struggle to produce more food sustainably, create economic growth, and improve health outcomes across the developing world, women play a pivotal role.  Women often assume different agricultural roles than men: they grow more garden crops while men grow more commodity crops and field grains[1].  Women are also generally charged with childcare and eldercare, and pay more attention to household nutrition and child health.  At the same time, women also face significant burdens in patriarchal societies where they have less access to land and income.  Due to a range of legal and cultural constraints across Africa in land inheritance, ownership, access, control, and use, women make up only about 15 percent of agricultural land holders[2],[3].  However some countries are making more progress than others in the push for equality: in Rwanda, for example, women and men have equal rights to men with regard to land ownership, inheritance, access, control and use.

Vital Signs analyzed data it collected in Uganda, Rwanda, Tanzania and Ghana to identify the key differences between female headed households and male headed households. The data Vital Signs has collected supports these narratives.  We used data from 820 households – 140 of which were headed by women – to analyze characteristics that were noticeably different between households headed by men and households headed by women.  Some of the starkest differences are in women’s access to agricultural capital.  Women own and farm smaller areas, and they use fewer pesticides, herbicides, or purchased seeds (see below).  This jibes with global data, which shows that female farmers only receive about 5% of agricultural extension services, while only 15% of the world’s extension agents are women[4]. 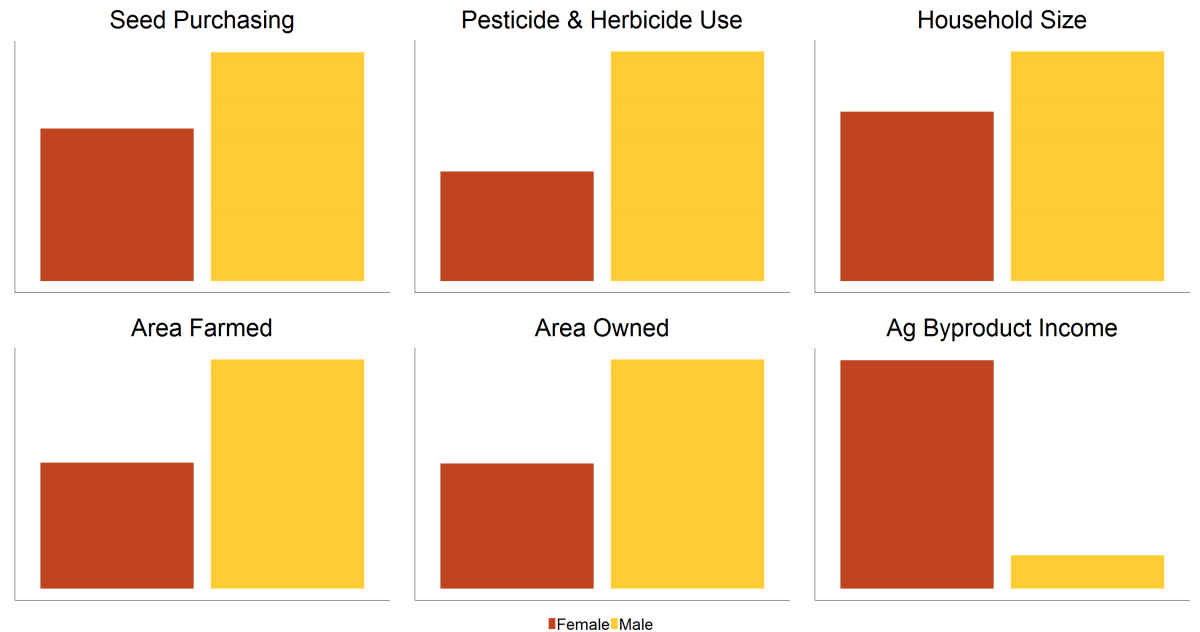 Interestingly, in spite of their lack of access to agricultural capital, female headed households also earned significantly more income from selling agricultural by-products, such as maize flour, cassava dough, coconut oil, palm oil, and banana beer.  A deeper analysis showed that while women are more likely than men to sell these by-products and to get more income from them, they don’t sell different by-products than men do.

It is largely recognized that women invest a substantially larger amount of their earnings back into their families (upwards of 90% by some reports, in comparison with men’s reinvestment of around 35%[5]). This can have profound impacts on household food security and nutrition. Our analysis shows that in agricultural landscapes in Uganda, Rwanda, Tanzania and Ghana, women are significantly lagging in attaining those gains in income and agricultural resources that would allow them to invest in better outcomes for their children, their families and communities, and the global environment.  Supporting women by giving them more access to agricultural resources and inputs could lead to large gains in terms of agricultural productivity and economic growth[6].

Vital Signs is communicating these findings to stakeholders in the countries where it has collected this data, in order to encourage them to adopt gender sensitive data-driven policy solutions that will fill this critical gap in women’s access to agricultural capital.